A Knocker - a Cornish mine goblin....

Here's a process and demo of a simple painting. It's a basic character design for a book on
goblins, and this one is a Cornish mine goblin, called a knocker. 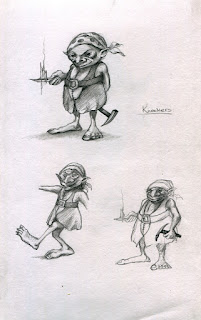 In my sketch book, I first draw a bunch of thumbnails, until I decide on the final character
design and position for the painting. For this picture of a Cornish Knocker, I pretty much
already had an idea of what I wanted to do, so it was just a matter of refining for the final
sketch. 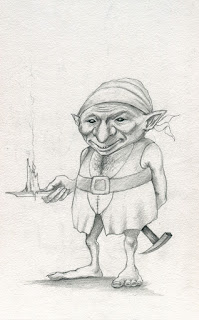 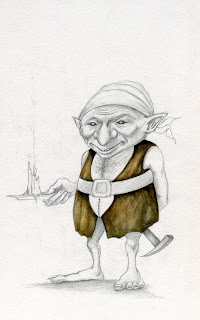 Now to paint... I'm using acrylic paints here, but with a very 'water colour style/technique'. I
do like that versitility of acrylic paints, but water colour paints would work just as well.
First paint the leather clothing. Use a dilute base of raw sienna to keep the tones warm. Over
paint with a mixture of raw umber and green umber. Paint one section at a time, and before
completely dry, use a clean damp brush (not wet), to knock back areas of the paint. This will
put back highlights in certain areas, ie over the thigh. Use this technique lightly and sparingly
to give the leather texture and creases. Use Vandyke brown for shadows and to tidy edges, ie
around the belt and on the shoulders. 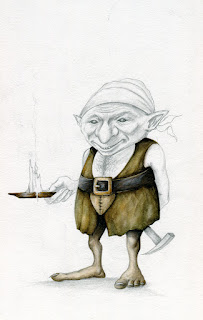 Paint the 'codpiece' and the belt. Use buff titanium for the codpiece and edge with raw
umber. Rub this last colour in with an almost dry brush, to create shadow and when dry, use
Vandyke brown to create the central line and leather threads that hold the two pieces together.
Edge with Vandyke brown. Use Vandyke brown for the belt, darker in the shadows, more
dilute as it comes round the stomach. Leave a thin edge to the belt unpainted. Rub the tiniest
amount of titanium white in for highlights before the brown is completely dry. Now paint the
thin unpainted edge with very dilute raw umber.
Use raw sienna for the buckle, with raw umber as shadow and buff titanium for a few
highlights. Edge the buckle with Vandyke brown.
Use the same colours to paint the bronze candle plate, raw sienna first, then raw umber
around the hand and the other end. Edge with Vandyke brown and add titanium white
highlights 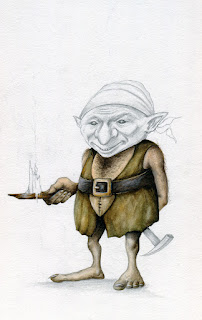 Start to paint the legs and arms and the rest of the body. Use dilute raw umber, with buff
titanium for highlights on the muscles, and Vandyke brown to deepen the shadowed areas.
Paint the hand in the same way. Use raw umber, slightly darkened with Vandyke brown to
paint hairs on chest, shoulders and arms. A fine 3/O brush and a light touch is necessary
here. (Tip - stick to the edges of the arms). Do the same for the legs and add some hair to the
feet  also. 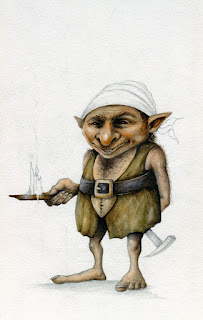 Paint the face in the same way, buff titanium and raw umber. Use very dilute mix of
transperent red oxide to give a rosy glow to the cheeks and a touch at the end of the nose
and tips of the ears. Use Vandyke brown for shadows, blended in gently. Paint neat
transparent red oxide onto the eyes first, and then use Vandyke brown over the top. Leave an
are of the red oxide showing. Finally, add a tiny dot of white for the eye high light - this is
optional, the eyes will take on a different look if the high light is left out. 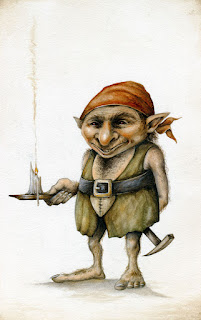 Paint the hammer, candle and the knocker's hat (or in this case more of a bandana) The hat is
transparent red oxide, with Vandyke brown shadows and for definition. I've washed out the
red oxide a bit in the centre to create a subtle highlight. The candle is buff titanium and
Vandyke brown sparingly used for shadow where the wax has run down. The hammer is
Vandyke brown, dilute where it is lighter. In the candle flame (transparent red oxide) I have
added some deep cadmium yellow... just a touch. The 'smoke' is raw umber, very dilute. I've
also added a dilute raw umber shadow.


Finally, and when all was dry, I washed the whole thing with extremely dilute raw umber, wet
in wet. I did this just to change the tonal values slightly and to give the bare white back
ground an bit of colour. 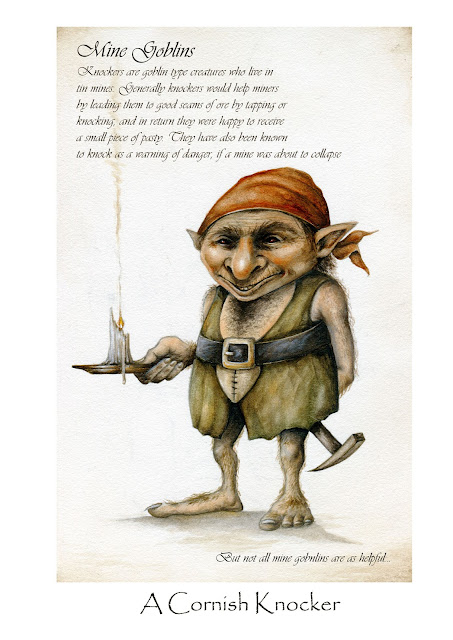 Some other pages on knockers... 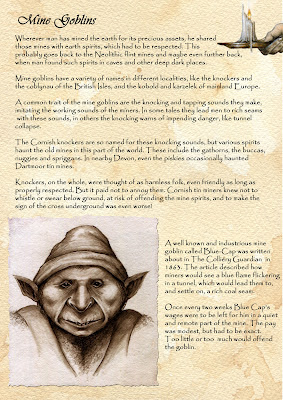 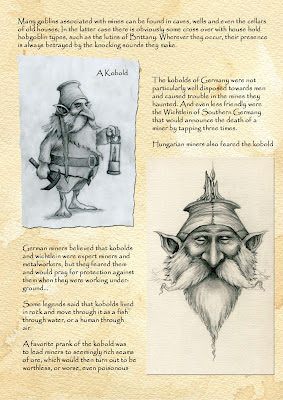 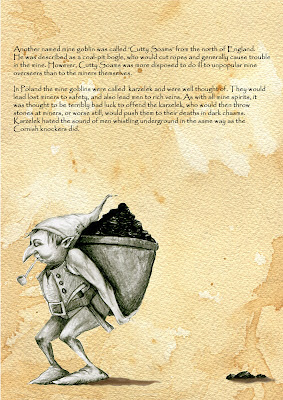